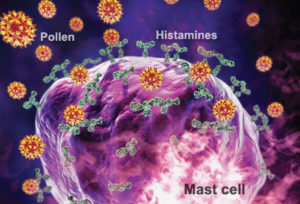 We write a lot about POTS here on the blog, but it is time to channel some attention towards our other tribe of faithful followers, those diagnosed or related to someone with Mast Cell Activation Disorder (MCAD). A few months back we posted an article that provides a broad overview of MCAD, here is the link: https://santamariamedicine.com/2014/05/mast-cell-activation-disorder-symptoms-causes-diagnosis-and-treatment-options/ I encourage anyone unfamiliar with the disorder to read through the article, it can also serve as a great refresher.

The purpose of this article is to help you understand the link between Mast Cell Activation Disorder and histamine. Controlling histamine levels in your body if you suffer from MCAD can help to lessen the severity or even eliminate some your symptoms. In order for you to understand how histamine can impact your MCAD, there are a few other key players that we need to introduce: triggers, Immunoglobulin E (IgE), and mast cells. I will walk you through each one and by the end you will have a better understanding of what is going on inside you body.

First let’s talk about triggers. A trigger is anything that can set off the allergic response inside the body. Everyone is sensitive to different things. For some people it may be pollen, for others it may be certain foods. Perfumes, certain chemical additives, and pet dander are other common triggers. Upon first contact with a trigger, the body may not produce any of the typical symptoms of allergies but it will take preventative measures in case you encounter the trigger at any point in the future. This provides a perfect segway into talking about Immunoglobulin E.

IgE is a protein that functions as an antibody. The immune system uses antibodies to identify and neutralize foreign invaders, such as the triggers we just discussed. This IgE protein can be found attached to the surface of mast cells. A great analogy to describe the relationship between triggers and IgE antibodies is a lock and key. IgE acts as a lock, and as we all know only one key can open a lock. IgE is created to be “unlocked” by only one key: those triggers that your body has decided that it doesn’t like. Once the triggers slide into place onto the IgE, the allergic response is activated.

I briefly mentioned that IgE is commonly attached to mast cells. When the allergic response is set into motion a series of reactions take place that ultimately ends in the release of histamine. Histamine is a chemical neurotransmitter- in other words it is a substance produced by the body that functions as a messenger. One of histamine’s biggest claims to fame is the role it plays during allergic reactions.

It is also the substance responsible for most of the symptoms you may experience during an allergic reaction or MCAD episode.

I do want to clarify that mast cells can be activated aside from the traditional allergic reaction described above. This is often the case in MCAD. Mast cells will spontaneously undergo degranulation, which releases histamine into the body.  The excess of histamine will then cause the symptoms that are usually associated with allergies. Basically, there is no need for an antigen to bind to IgE, the body will spontaneously release histamine. With this type of mast cell activation, diagnosis becomes difficult. Normal tests focus on specific allergies that are mediated by IgE. Stay tuned for our next article that will explain different classifications of MCAD.

This is a great 2 minute video that sums up everything I have just explained to you: https://www.youtube.com/watch?v=UfLAwO4_NTQ

I hope you now understand why there is so much buzz around histamine when the topic of MCAD comes up. Stay tuned for some future posts on how to better control your histamine levels and hopefully reduce your symptoms!